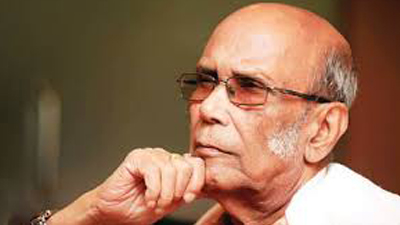 What would he do now? Zamal despaired after watching the last bus whiz past him, emitting black smoke. Only if he didn’t stop by to buy a cigarette, only if the shopkeeper didn’t take time to return the change, he wouldn’t have missed the bus, chasing after it and shouting: Stop, stop.

The conductor couldn’t hear him. Zamal saw him, though, in a blue shirt, his face blocked by the window. Not much of an athlete, Zamal was now gasping with sweat on his forehead. He didn’t have a kerchief to wipe his face. Moreover, as he was dashing about, the cigarette got all wet between his lips — like a little boy’s wet trouser. Tearing a bit from the bottom, he tried to puff on it but a bitter taste settled on his tongue. He flung the cigarette away.

Now what would he do at eleven o’ clock at night? If he hailed a rickshaw, it’d take two hours to reach home with one and a half taka fare. He had no clue as to how much a three-wheeler would cost. He’d hardly ride one. He might have a total of ninety or ninety-five paisas in his pocket, considering it’s twenty seventh of the month.

Why did he go for that damn cigarette? Neither he could get on the bus nor he could relish a smoke. On top of that, nine paisas were wasted. It all started after a couple of puffs from Alamgir’s cigarette. He enjoyed it but felt embarrassed to ask for another one. The thirst lingered even when he came out onto the street. He ended up buying one.

How blissfully Alamgir lit one cigarette after another, exhaling billows of smoke. He looked like a man from a different, colourful world! Zamal felt disconcerted. It was not exactly regret for the wastage of money. It was more like the pangs of jealousy after seeing Alamgir’s well settled life. How happy Alamgir must have been—the thought leapt out at Zamal, making him feel down and distraught. The pain stayed on, stabbing him continuously like a knife. He shouldn’t have come. But would he miss it? He had to come to witness his friend’s rise in the society. To see how he became an affluent man and lived in a posh house.

Hadn’t he stared at the rich people’s houses standing on the street? The curtains fluttered in the air as if waving at Zamal. How he longed to step onto their doorsteps to steal a quick peek inside! And today Alamgir had given him that chance.

The passengers were more fortunate, Zamal felt. They were heading towards home, honking all the way on the wide road. They’d reach their doorstep shortly and would sleep, snuggling up inside the blanket. Only Zamal had to come home alone. By now, his eyes started hurting due to the fog. He couldn’t see well in the distance. In the freezing cold, his teeth chattered and he felt that his ears belonged to someone else. The cold rose through the shoes pervading his naval. It didn’t help much to pull the sweater tight. His whole body shivered badly, as if, to drive the cold away. He felt he’d no control over himself any longer.

How he was enjoying his time at Alamgir’s house! With heavy curtains, blazing light, and strong heater, it was a place full of warmth. A feeling now hard to shrug off. And then there was a cup of steaming hot coffee. It tasted a bit bitter at first reminding him of his childhood history book where he read about coffee beans. He relished the strange feeling. Alamgir had his coffee without milk, a thing Zamal didn’t dare. Or perhaps, he’d like to have a taste of it but felt shy to ask. Did Alamgir spot his greedy eyes? Did Alamgir sense it was his first taste of coffee?

And then at the dinner table what a mess he’d created! He was feeling embarrassed even now but could do nothing to mend it. He had not only spoiled the beautiful tablecloth by spilling curry onto it but broken a glass to make matters worse. It was a flowery, blue coloured tender glass, shattering on the floor with a marvelous musical sound. As if it was a new, strange thing that occurred. Yet Zamal, who had never broken anything, could forget the whole thing if it was not for the change of attitude from his host. Alamgir’s wife who joined them at dinner, serving him with a smile, turned serious after the incident that made Zamal more uncomfortable. After this, he polished off fast.

This sole event was enough to make Zamal feel low, proving him as an outcast in the society where Alamgir lived. He didn’t belong to that place. He felt more outraged at Alamgir and his wife than he was annoyed with himself. Something inside him wanted to scream at their faces: It won’t last forever. One day you people will degrade to my position. You’d have to stay in a house with a thirty taka monthly rent, do your own cooking, and eat meal sitting on the floor on a tinned plate.

But should he nurture such thoughts? Wasn’t Alamgir his childhood friend? A friend for whom Zamal taken risk to help during the maths exam. Zamal had written ten essays for Alamgir to memorise for the exam. Back then, Zamal felt it’d mean nothing if they both couldn’t pass. Alamgir, on his part, always shared his tiffin with him. Zamal was content with that. Never did it cross his mind that this was an act of pity. Neither did it feel like they had a social barrier between them.

No, there was no distance until this Friday when he met Alamgir after sixteen years. Weren’t they together even when the result of matriculation was out? Flipping through the newspaper they learned about it – both secured second division. Though Alamgir said Zamal deserved the first division. Zamal didn’t care much. It was Alamgir who kept asking him which subject might have failed him to miss the first class.

After they passed the ISC, Alamgir’s father sent him to England to study marine engineering. Though Zamal felt sad for the possible separation, he was happy for his friend. It felt as if it was not Alamgir but he was going too. Then days passed by, months rolled into years. Zamal used to tell his new friends about his friendship with Alamgir. As if he could see his friend with his innocent smile. He thought no matter how much time went by, once Alamgir would return, their friendship could resume with the same warmth. They’d do the same chores, devour the same meal. And at night, lying side by side, propping up against pillows, they’d chat away the night. They’d laugh out loudly as before.

Zamal was startled by the calling of the rickshaw-puller. No, he won’t go. Zamal motioned the rickshaw driver to leave, pretending that his destination was close by. Digging his hands into his pockets, he strode on. What was he thinking all this time? He was surprised to find that he still had feelings for his friend after all these years. Zamal shook his head vigorously as if to drive away the good thoughts. Instead, he’d deem Alamgir as a lesser man. One of such people in the society whom Zamal despised!

Zamal felt resentment all over again. Alamgir gained weight a bit. After a clean shave, his face gleamed. He wore a sweater that sparkled as well. How well he looked! And here Zamal’s life would be wasted in toiling around a murky, stinky slum with a bunch of kids and one ugly, sick wife.

Alamgir had cheated on him. Zamal would have won if he didn’t help him pass the math exam that day. Zamal trailed far ahead with his mind engrossed in such thoughts. At this moment, he came to a sudden halt, spotting a crowd in the distance. Their assembled murmur scared him. He looked around, bewildered.

It seemed the street lights turned the darkness into clumps of ice here and there in the fog. All around him he felt unreal. Zamal threw a good look and spotted a bus standing right in the middle of the road with a commotion of passengers. Something must be wrong. As Zamal reached the spot, he was astonished. The bus that didn’t take him earlier now stood motionless, being out of service in the mid-road. Gathering his courage, he approached the crowd and asked what the matter was.

The passengers exploded a string of invectives at the bus driver. The conductor was peeking under the vehicle and the driver fiddling with this and that in a benign attempt to pacify the people. But it was clear that the bus couldn’t go further.

A few flustered passengers got off and started walking. A few grumbled about how could they walk all the way to Patla Goli? Yet, they too set off. Zamal joined the crowd. He’d also go as far as Patla Goli. Soon, it was a brave, lively Zamal who started leading the group, forgetting all about Alamgir.