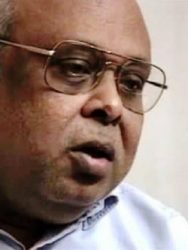 Greetings to you, my beloved

Fear not,
I will take such measures
That the army will march past you
With a bunch of flowers
On their shoulders
And salute, only you,
My beloved.

Fear not, I will take such measures
That crossing forests and thickets,
Barbed-wire fences and barricades,
Carrying memories of many battlefields,
Armoured vehicles will come to your threshold
Laden with violins,
Only for you, my beloved.

Fear not, I will take such measures—
Such measures will I take that
B-52s and MIG 21s will zoom overhead,
And like paratroopers,
Chocolates and toffees and lozenges,
Will shower on your lawn,
Only for you, my beloved.

Fear not, fear not,
Fear not…I will take such measures
That a poet will command
All naval fleets in the Bay of Bengal,
And in the coming election
A lover will defeat a Minister,
My beloved.

Know this, all conflicts will end—
I will take such measures
That a singer will easily
Become the leader of the Opposition Party,
Trenches in the borders,
Will be guarded all-year round
By red, blue and golden fishes—
Everything will be banned,
Except the smuggling of love, my beloved.

Fear not
I will take such measures
That like the secret attack of Spring
Upon a wintry park,
Revolutionaries will invade the city
With accordions.

Fear not, I will take such measures,
That when you go to the State Bank
You can exchange a bunch of roses and chrysanthemums
For at least four lac Taka,
Four cardigans for a single jasmine.

Fear not, fear not
I will take such measures
That air, naval and artillery battalions
Will surround only you, night and day,
And greet you, my beloved.

Before Going to the Saloon

My hungry hair flies wildly in the air
Not easily tamed.
Many times, many times,
Have I tried to feed it well
And put it to sleep. “The monster is coming…sleep my baby,”
But nothing works.
My hair stands sleepless
Like a santal sardar with his lean muscular body, unclad;
Or like some motionless, unblinking rebel
Unbent by storms or bowed down by the rain,
He stands for ages, for ages.
This mad, black horse
Terrifies everyone, threatens to disrupt
Afternoon traffic, injure friends and relatives.
Everybody says the same thing,
“It’s grown too long, cut it down to size,”
It’s grown too long, past the ears,
Down to the shoulders.
There’s nothing to do.
It’s my hair, but not within my control.
It grows on its own, moves and scatters,
Flies like a rasping crow,
Invades someone else’s sky
Like its own, uses it with reckless abandon.
My hair is like some truant schoolboy’s
Covered with dust from head to foot,
Obsessed with the dream of possessing a football;
It is like some maverick player
Dominating the field
Like a stubborn monarch,
Heedless of the referee’s whistle.
So this is my hair, my ruffled, unruly hair,
Somehow sticking to my perplexed skull.
Suddenly, like a traffic signal,
My wild, disorderly hair will be tamed
When the barber’s firm, active scissors
Snip them off—And so I would go to the best saloons,
To discipline my hair.
The arrogance of my hair
Is not acceptable to members of civilized society,
It has to be cut, shortened.
My head has to be like ten other heads,
Like ten other heads in society,
And so it must be cut down,
Trimmed and flattened, silenced over my skull,
It must lie quietly plastered over my head
Like a cold mat.

Still, it is my hair!
Blind, silent, and deaf,
It springs up again
Like an injured horse
Even before the month is past.