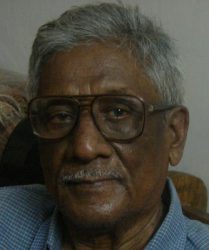 In search of you

It was probably here—yes, right here. There was the shade of trees. The burning sun of Chaitra lay beyond the shade. No, the krishnachura flowers had not yet blossomed, but the bloom was in the air.

He laughed foolishly as he looked into my eyes.

After a pause, he thoughtfully queried, “So, you are leaving?”

“Yes, what’s the use of staying? Father himself has come to take me home.”

“When will you return?”

When? I thought anxiously. When will I come back? Yes, when?

I could not tell him. Who could, in those days?

I said I wouldn’t come back.

“What! What do you mean?” He had become very angry. He was such a kid: He flared into rage at the least provocation. His eyes grew red. His dark face looked darker with the rush of blood. It seemed he would hit me. But his anger did not last long.

“What do you mean—no? I can see that you are angry.”

“What does it matter to anyone if I’m angry?”

“It really does make me laugh to see you this way. What kind of a man are you, eh? Did I tell a lie?”

“No, it isn’t. Does anyone know what will happen after two days? The situation is so tense. If it remains this way, do you think father will let me come back here?”

Slogans were being chanted far away.

We walked beside each other.

I would go away. Who knew when the university would reopen? The government had taken on such a threatening aspect. There had been random firing on processions. So heartless, so cruel! Rumours were that planes full of soldiers were coming in from the western part. Who knew what would happen?

“Who knows?” He gazed afar with a bewildered expression. “Yes, something awful may happen.”

“But isn’t there talk of a compromise?”

“Who knows?” He replied vaguely. His brows had knitted in a frown. It seemed he wanted to say something. I waited. Then I said, “What are you thinking?”

But he remained silent. He was like that. At other times he could spin marathon tales of his own accord. We had gone beyond the Art College gate. We were now near Shahbagh. An army van, full of helmeted soldiers with their rifles stuck outside, rushed by. Two more vans followed. Right then a rickshaw appeared out of nowhere. The rickshaw puller said, “Sir, go home. There’s been firing on a procession. There might be curfew again.”

He now became agitated. “Yes, let’s go back now. Let me take you back to the hostel.”

We did not take a rickshaw. We walked so we would have a little more time together. I would be with him a little longer.

But we hardly talked on the way back.

When we reached near the hostel gate, he said, “I better leave.” I held his hand. There was the guard at the gate, but I felt no inhibition. I looked at his face. I wished I could kiss him. He looked deep into my eyes. His eyes were so dark that they seemed unfathomable.

“Listen,” I said, “You too should go home. What’s the use of staying here? Don’t worry. As soon as the exams are over, I’ll tell my mother about us. I just want you to stay safe and well.”

At that moment his eyes looked even deeper. A faint smile played on his lips. Maybe he too felt a desire to kiss. I let go of his hand and stood by the hostel gate. He took the road towards New Market. He turned and looked back at me several times. I saw my love going away. As far as my eyes could, I kept gazing at him. I just wanted to keep looking at him.

Yes, this is the place. This is exactly where we stood, under this very tree. What tree is this? Jarul? Or something else? Who knows? This is where my love and I had stood.

We had sat here, on this bench. It was an afternoon. He had laughed uncontrollably. The sound of his laughter rang so loud that two kids had come to see what was going on here. When he saw the kids, his laughter rang out even louder.

I scolded him. “Why are you laughing like crazy?”

“It’s such a laughing matter,” he paused in his laughter to say, “When will I laugh if not now? Bilqees and Gopa will go and see that neither you nor me are there. They will have to sit and watch that horrible movie. Poor things! What a waste of their money!”

Actually I was the culprit. These two friends of mine had become very naughty. They were always after me. They seemed to think that he and I spent our afternoons in hotel bedrooms, that we necked in cinema halls and kissed in restaurants. They always kept an eye on us. They hunted where I hid tickets for movies. Whenever I went out they would ask where I was going. When I returned they would say, “How was the afternoon, eh? Go and take a good bath.” This was the kind of suggestive remarks they were always up to.

It was actually Mahmud’s idea – we bought two tickets for a bad movie. My friends saw these tickets in my drawer and bought tickets for themselves too. When the day came, they followed me to the cinema hall. Mahmud and I were standing near the hall when they both arrived there. Even when we came face to face, they feigned to be strangers and walked rapidly into the hall.

That was when Mahmud began to laugh. We sold our tickets and came to the park. We thought that the park would be deserted in the afternoon heat. It was deserted. But he started to laugh so crazily—it spoiled the afternoon.

Yes, Mahmud did stop laughing. Then he became very serious. He started to unravel the complicated knots of politics. He did not speak about himself, he never did. He even avoided talking about his home. He said, “Why should I tell you about all this? When the time comes, I will tell your father.”

I wished he would talk about his mother. Sometimes he talked beautifully about his mother—his mother’s school, the way she often sat alone on the verandah. She had an obsession with crocheting—yes, and she loved to read. She read Hardy and Sharatchandra. Sometimes songs flew from her lips: The worship of sorrows has not yet ended.

I don’t have such a mother. No one does. I wanted so much to see her, meet her, and hear about her. I often asked, “Have you gotten a letter from your mother?” She wrote wonderful letters. She wrote vividly about her deep loneliness, about the trees in their backyard, about why the Black Prince had not bloomed. She wrote about birds, about the dreams she had had, about books she had read. And in each letter memories of the past occupied a lot of space, where there rose up pictures of the infant Mahmud, the child Mahmud or the boy Mahmud. How Mahmud had once fallen down the stairs as a child and cut his chin—I had seen the scar on his chin. On the left side of his chest was a red wart—that too I had read in one of the letters. I had never seen the wart though. I felt I got to know Mahmud more and more through those letters. That is why I love to read his mother’s letters.

See this path here—this is where we used to walk. He walked with his head held high. His dry hair waved in the wind. His hair was ever in disarray and always flew. So many times I told him to use some sort of cream, but did he ever listen?

We walked along this path every day—-a quiet path full of shady trees. One day we saw a squirrel. Mahmud picked up a stone and flung it at the squirrel to scare it. One day as we were walking, a procession came up. We stopped and stood under a tree to watch it. That day Mahmud confessed his love to me. He said he always wanted to be near me. He hated to be alone, to be away from me.

Mahmud always spoke in a clear-cut manner. Sometimes when I was alone I thought of it in amazement. He did not seem to have any inhibition, any shyness at all. Whether or not it was the right place or time, he always spoke his mind without any hesitation. One day we quarrelled along this path. As we fought violently, people gathered to watch us. But that did not bother him at all. He called me all kinds of names that day. Afterwards, we both continued to use the same path to go to the university. We often met along the way, but we did not talk to each other. That quarrel lasted a long, long time.

This is the field where we would escape from the dorm on moonlit nights. We sat here and rambled together. The dew gathered on the grass. When we went back, our sandals and feet would be all wet. My saree would be full of prickly thistles. Alas, those nights! The guard always threatened to report our nightly escapades, but he never did.

The guard has now returned, but he cannot bear to look me directly in the eye.

I cannot find Mahmud anywhere. No one knows of his whereabouts. Ehsan says he was last seen wearing only black trousers, holding a rifle and positioned beside Iqbal Hall.

No, nobody has seen his dead body.

Haripada says, “No, I did not see his body in the pile of corpses which were buried. But one evening I had seen him in Jagannath Hall.”

Zahid brings the information that he had gone out with a rifle on that dark night. As he left the dorm he had declared that dying without fighting back was meaningless.

The guard says, “Yes I recognised Mahmud Saheb. I remember clearly that he was in the hall that night. He told me not to delay, to flee at once. I left the hall right away and escaped. I don’t know what happened afterwards.”

But what should I do? Sometimes I wonder if they had dragged his body along this very path. Sometimes I feel he is here under this very tree; at other times I feel he is right beside the field. Sometimes I come back and stand at the side of the field; sometimes I walk slowly along this path. Sometimes I stand silently under the shade of the jarul tree. Sometimes, again, I have a feeling that somebody will call out to me all of a sudden, my love will call me from yonder. My life will reawaken, will begin anew somewhere from within this burning sunshine, from this infinite afternoon, from the ashes of my devastated universe.

When life force leaves the body, there remains the corpse. When the corpse rots, only the bones remain. But what is left after the bones disintegrate? Tell me, what remains then? Yet, why do I have to keep coming back again and again?